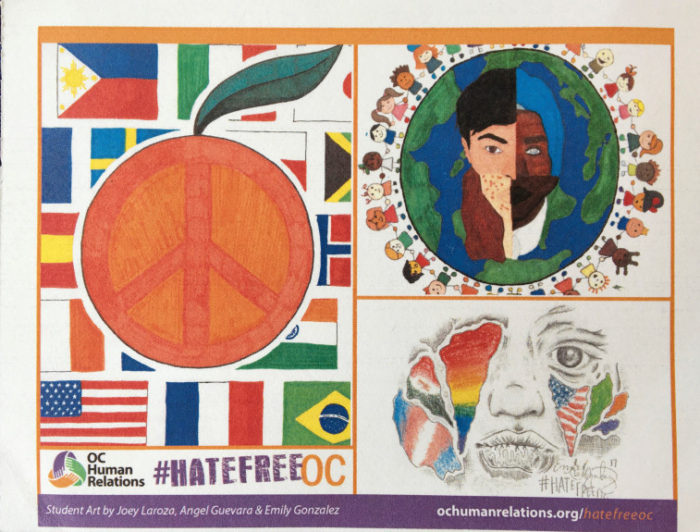 The annual event recognizes what the organization considers “unsung heroes” who work on behalf of making Orange County safe and inclusive.

As part of the evening’s presentations, the more than 500 attendees heard a recitation from the winner of the group’s YouthSpeak Speech Contest, Raj Sawhney, a student at Fairmont Preparatory Academy in Anaheim.

“We must learn to harness the power of words through the art of reflection,” Sawhney said, coming to the end of his speech. “One person, one word, one reflection, we as a community can change the world together. I pledge to reflect. Will you?”

The night’s adult honorees accepted their awards onstage after their work was introduced in short videos:

— Community-Policing Award for creative strategies to provide outstanding service and build positive relationships with their community:

— Diverse Community Leader Awards for those who have made extraordinary contributions to human or civil rights in Orange County:

Winners: The Rev. Charles Dorsey of Christ Our Redeemer AME Church in Irvine, for mentoring at-risk youth, building relations between members of the county’s African-American community and local police, and organizing the OC Solidarity March and Summit.

Laura Kanter (Santa Ana), for her leadership in the Lesbian, Gay, Bisexual, Transgender, Queer community that includes raising awareness about the discrimination and abuse faced by transgender residents of Orange County.

Bang Van Pham (Tustin), for her work on behalf of homeless people, such as the weekly food distribution program she organized at Bao Quang Buddhist Temple in Santa Ana, and helping to connect the county’s Vietnamese American community to OC Human Relations.

TyRon Jackson (Tustin), for the multiple events he has spearheaded for the homeless through Operation Wishes, which he founded in 2009 to provide holiday meals and food drives, school supply giveaways, shower and laundry services, free haircuts and other services.

Bill Bracken (Huntington Beach), for his Bracken’s Kitchen food truck outreach that brings healthy meals made from rescued food that the former high-end restaurant chef serves to homeless families in poor neighborhoods with the help of dozens of volunteers.

— Outstanding BRIDGES School Award for exceptional contributions in promoting, nurturing, protecting and/or cultivating a school campus that is safe, welcoming and equitable:

Winner: South Junior High in Anaheim, whose educators and students work together to model collaboration on campus and create partnerships with other programs. Examples include an oral history project that involved collecting the family stories of relatives and neighbors and showcasing the OC Civil Rights History Exhibit during back-to-school night.

— Distinguished Business Award for going above and beyond to embrace diversity and inclusion in the workplace:

Winner: Target, whose diversity in the workforce at its stores, distribution centers and headquarters underpins the effort to better serve and respect its customers and the communities they live in.

Winner: Andrew’s Ice Cream in Orange was the recipient of the inaugural award for standing up to the hate of a customer who yelled insults at two Muslim women who came into the shop wearing hijabs, or head scarves. Co-owner Cindy Ramsay and employee Jessie Noah both refused to serve the man, who was escorted out of the store.

For more information about the honorees, go to ochumanrelations.org.