Looking back, Gloria Banks can see that she might have been smart to just be quiet.

Little black girls in 1950s McGehee, Ark., weren’t supposed to look white people in the eye, she says – much less tell them off.

But if Banks had learned that lesson, she wouldn’t be the pride of Orange County’s Friendship Baptist Church, the dedicated volunteer they call Miss Gloria. She wouldn’t be one of 11 local heroes being honored by OC Human Relations on Thursday. 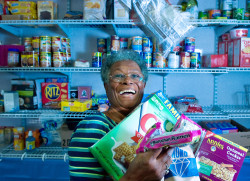 Banks has always been her daddy’s daughter. As she tells the story, James Miller wasn’t one to keep quiet when something needed saying. Miller was a farmer who never got past fourth grade. But he was a Pentecostal minister with a cause: Empowering his black neighbors by teaching them to read and write.

Miller would gather families deep in the woods for lessons by bonfire light. Banks, the 11th of 13 brothers and sisters, taught writing and served as lookout.
“I was like my dad. I liked to mouth off,” Banks said. “When I think back on it, it’s hard to believe I’m still alive.”

But she couldn’t stop herself: “I watched what my dad and mom went through. It just set off a rage in me.”

The Miller family worked hard, Banks said. Miller raised fruit, vegetables, meat and cotton. Banks’ mother, Mary, churned butter. Miller sold all of that to the white residents of the town from his horse-drawn wagon.

But when black families went shopping, Banks said, they didn’t get a fair shake.

Banks said she would sneak out of school on shopping day and surprise her mom at the store – not wanting mild-mannered Mary to get bullied by the merchants.

“I saw in the paper that if you buy an icebox at McMahon’s you’d get a free turkey platter. Mom bought an icebox on layaway. I went with her around Thanksgiving time to make the final payment,” Banks said. “The proprietor told my mom that James had better come pick up the icebox right away or he’d sell it to someone else.”

Banks said: “I told the man, ‘We made all the payments. That icebox belongs to us. And by the way, where is our turkey platter?’ ”

In 1954, the year Banks turned 12, her father’s activism caught up with him. He was blacklisted by the townspeople, and with her brother drove out of town under cover of darkness. It would be two years before Gloria saw her father again, in 1956, when he was able to get the family train tickets to join him in California.

Resettled in Bakersfield, the family continued to work hard. But life got better. The brothers and sisters picked grapes and strawberries during school breaks. Banks worked as a maid, graduated high school, attended community college, married and had a daughter, Michelle.

After divorcing and moving to Placentia in 1979, Banks enrolled in Fullerton College and worked parttime there. Alarmed by the minority dropout rate, she became a founding member of the school’s Black Student Union. She helped found the Fullerton College food bank.

In their nomination letter for Banks’ OC Human Relations award, the Rev. Linda Long and Anitra Dempsey of Friendship Baptist sum up the highlights: Banks has been a member of the Orange County NAACP since 1982, eight years as president. Today, at 72, she chairs the NAACP’s Education Committee to ensure students are academically and financially ready for college. With the Santa Ana and Garden Grove Elks Lodges, Banks seeks Christmas toy donations for children. For 17 years she was active in the Tri-City Homeless Coalition.

“After what I’ve been through, what would I be if I didn’t have empathy for people?” Banks asked.

So Banks – who remains a Placentia resident – has focused her persuasive powers on feeding Orange County. She is lead volunteer at the Friendship Foundation Food and Clothing Pantry at the church in Yorba Linda. High-energy and quick with a laugh, she works her magic on grocery stores, factories, warehouses – anyone who might donate food.

“The Lord has given me the gift of gab to talk people into giving us food,” she said. “I’m just doing what comes naturally.”